If you say goodbye

Someone’s tears will fall in vain

And who’s tears will they be

But not me. There is no fucking way I’m gonna cry this time. I’ve been in several abusive (performance <-> audience) relationships before, no matter how many times they play that song on loop I WILL NOT CRY.

It’s a nice enough song, quite catchy. But by the third or fourth time it’s looped around, you just want it to stop – and exactly the same can be said for the whole performance.

No tears are going to bring back the £17.50, it’s gone. I should have known better, having been massively triggered by Forced Entertainment’s last offering – but back I went like some kind of lusty crack addict who thought things might be different this time.

The clowns on stage (they are literally clowns, I’m not being rude by referring to them in a derogatory manner as being clown-like, they are literally dressed as clowns) are in some sort of dispute. Their initial dust-up is actually quite amusing – like watching a couple of passing chihuahuas barking at each other, giving it all that. 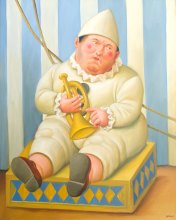 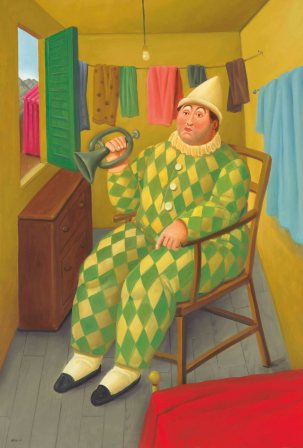 But then why does this stretched-out self-repeating portrayal of a trade dispute need to go on for ninety minutes? Why? If it had been sixty minutes it may, potentially, just about have been bearable to watch.

Can clowns aimlessly running around attacking each other with balloons and comedy horns be the basis of a ninety-minute long mime performance? Even if it can, why?

How many times can you repeat the same scene (or slight variations of it) for it to still remain funny? Or interesting?

The problem with Out Of Order is the same as with its predecessor show: as an audience member, once you lose your shit, it’s over – and there is no going back. You’re absolutely fucked if you reach the inflexion point: the show goes from just getting on your nerves and winding you up a bit to inducing a full-on Incredible Hulk-like psychological prolapse.

An anger swells up, in the strict confines of the stalls there is no viable outlet for this appalling rage. The show is about clown violence: towards the end of it, I just wanted to get up there, on stage, give every fucker a good hiding, then dive into the audience and batter a few of the giggling fuckers who were also winding me up. And if the police had turned up that would’ve wound me up and I would’ve thrown a few chairs and balloons at them too.

Beyond the magical Tipping Point of Incandescent Fury, there is no hope. They could have knocked out the most amazing artistry in the last ten minutes and I still would’ve been like: “fuck off you pricks”.

An old question needs resurrecting: why try to impress someone by deliberately boring them with repetition? Forced Entertainment seem to be theatre’s equivalent of tripping someone up because you fancy them.

Out Of Order is a properly baffling discharge of slapstick tomfoolery. It feels like a telling-off: the audience is being punished for some sort of crime – failure to stop at the scene of an interpretation.

No theatrical performance should leave you feeling intellectually abused, no one can ever, ever win my love and admiration by hurting me with their art; I simply won’t stand for it.