Is the future nuclear? Or are we in the nuclear age already? It’s all so hidden away and elusive, we only ever seem to hear about it when it goes badly wrong. But what about the bit that is really (and deliberately) hidden away: what will actually happen if a nuclear bomb were to be detonated?

Nuclear Future by Gameshow Theatre is a mysterious solo show that sets about exploring a very peculiar philosophical paradox: how can something be so small that you can’t even see it – yet also be capable of instantaneously unleashing something so big that your mind can’t even imagine it.

Astrid (Leda Douglas) is a weapons engineer, she literally is in the business of making nuclear weapons. Yet on stage she only ever goes about her ordinary life: she brushes her teeth; she gets on the bus, she rings her dad. And most of the time she frets about her daughter: what she’s doing, who she’s talking to, even what she might be thinking.

The show exudes a strong mood of sinister mystery, it seems to describe some kind of Orwellian dystopia – one where Astrid keeps hearing sirens, are they police cars or ambulances? Has something happened, or is something about to happen? 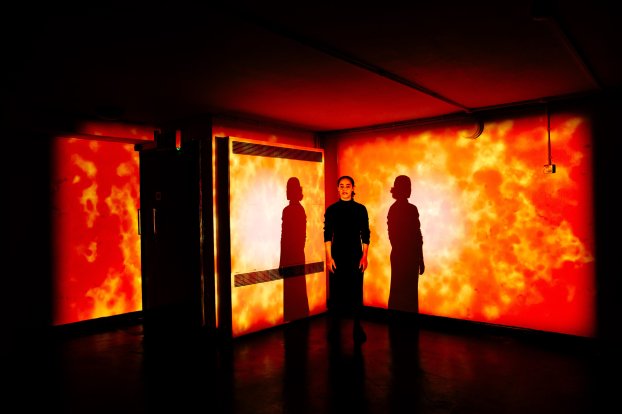 Everything on stage appears mundane enough, the story line seems to be about the commute to work, or dealing with an unruly child. But interspersed among the high-tension scenes of Astrid going about her business are short, sharp science lessons that give the audience a clear indication of how these weapons work and just how much damage they could do.

Presentation-wise two giant screens make up the set, projected lighting effects and animations make up the bulk of the visual spectacle, often eye-pleasing when super-imposed onto Leda Douglas’ forbearing performance, which was always strongly concentrated on verbal presentation, rather than physical. 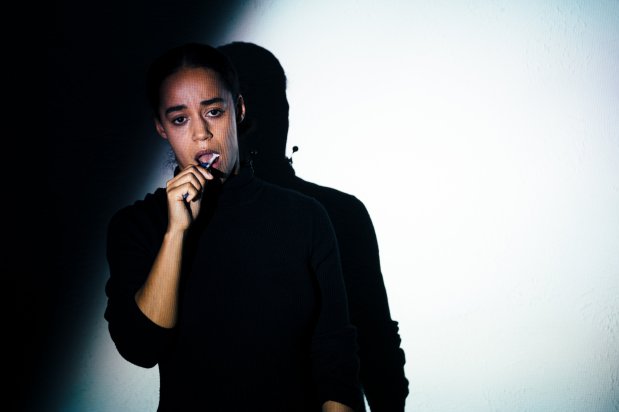 Ultimately, Nuclear Future is a deep dive into one woman’s struggle to deal with uncertainty. For all the talk of 100-megaton explosions it comes across theatrically as being more like one big, lusty strike on a reverberating bass drum. It may not go off with a big bang, but it certainly leaves a smoky haze of resounding questions echoing around the mind.