Six very angry looking men are sat on stage, staring down the audience. This is a war of attrition, who will back down first? Each one is oozing arrogance, evidenced by the outrageous manspreading on display, as well as a nonchalant leer which suggests that these guys are just not arsed.

The six men are prisoners – inmates of HMP Wandsworth – but this is no ordinary story of life behind bars; The Jumper Factory is arguably much more about the drawn-out agonies of disconnection from the outside world.

Constructed in 2018 through collaboration with real inmates serving sentences in Wandsworth prison, The Jumper Factory puts across a series of short but powerful stories that lay bare the consequences for those who know that they’re slowly losing more than just their personal freedom.

The performances are lucid and potently compelling. Each young man seems to have his own ponderous concern: from having to lie to family members about “being away” – hard at work in a jumper factory – through to the agonies of worrying if girlfriends will stay loyal, or whether the kids will even remember their dad. 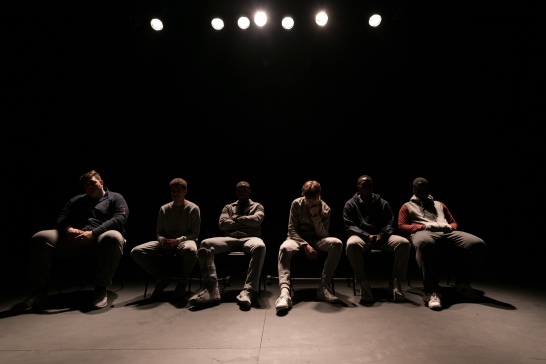 The excellent acting performances deliver slow and satisfying transformations: in all cases the visual facade of masculine bravado gradually peels away to eventually reveal a far more contemplative character beneath. The reversion to machismo is never far away though, brilliantly delivered in the form of a deep dilemma over whether to make a go of staying on the straight and narrow or whether to just accept defeat and take the easier and more familiar path of crime.

The Jumper Factory is a short and sharp prison experience – but rather than depict what it’s like to be on the inside, it cleverly induces a far more relatable sense of trepidation centred around the impacts of not being on the outside.

With a script that literally and realistically speaks the words of inmates, and thanks to powerful performances from a cast who have themselves each interacted in some way with the criminal justice system, The Jumper Factory is an emotive and touching reminder of the old saying that you don’t know what you’ve got till it’s gone.