Welcome to the community centre, a very Mancunian community centre: this is the gentle, beating heart that quietly ticks away; the lifeblood that unites an extravagant community of assorted characters.

Written by soap star and comedienne Nicola Gardner, The Community Centre depicts a day in the life of a fictional hub where visitors can come to simply pass the time away, and it appears that the under-worked staff can do the same too.

As well as having written the play, Gardner also takes on an acting role, initially as Patience – the hilariously flamboyant manager / receptionist, though she is keen to make it very clear that she is much more manager than receptionist.

The show revolves around the premise that the audience are actual visitors to the community centre. Hence Patience welcomes everyone in and starts offering up a tantalising list of some of the special events and activities that are open to all, such as Rock Climbing for the Truly Terrified.

On stage a static set switches focus between two main sets of characters. A quartet of Caribbean elders are the centre of attention, theirs being a relaxed world of dominoes, crossword puzzles, card games, and knitting. But this is no grandparent’s tea party: the chat is racy and hilariously sexualised, the elements of innuendo stand out so well and make for a genuinely amusing comic experience.

In contrast, the other half of the set presents a different mood: two female members of staff sit around reading Take A Break magazine and drinking copious amounts of coffee. Both acknowledge that they have little work to do, so instead conversation turns to their failed attempts at dating, though here too there is plenty of amusing and cutting comedy.

Entering the fray occasionally is Robbie the caretaker: the rudeboy from Fallowfield – a young white man who says he’s a Rasta, evidenced by his constant one-way conversations with a Bob Marley poster, and his rather dubious fake dreadlocks.

The Community Centre is a slow-paced and gradually emerging world of deep and complex characters. There is something resembling a connective plot as Patience the receptionist patronises both the senior citizens and the staff in an attempt to drum up interest and participation in an upcoming carnival event.

But the real entertainment comes from getting to know the characters being presented – some don’t feel as if they’re being acted, it looks like we’re seeing real people behaving entirely as they would in real life. 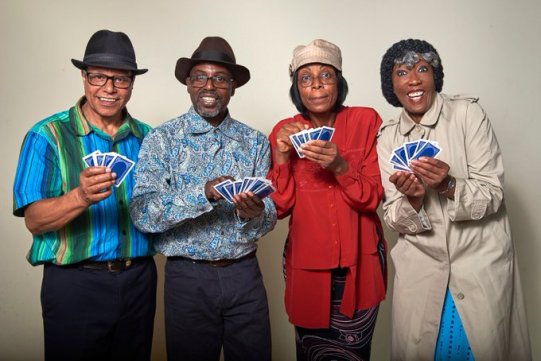 And despite being full of well written and expertly delivered jokes, there are much darker moments that emerge organically as continual references are made to the Windrush scandal. Being surrounded by so much comedy, the suddenly-presented notion of deporting someone who has lived in the same place for decades immediately becomes a joke in itself. And this “joke” sits appropriately in the contextual setting – namely the concept of potentially removing someone from this buzzing community centre for no particularly good reason.

Built on a strong comedic foundation of people just generally behaving badly, The Community Centre is primarily an amusing little sitcom that generates genuine laughs. But in doing so it highlights the unquantifiable power and value of community – and thus provides a compelling rationale against any attempt to untangle and unravel the complex structures that probably stretch a lot further and deeper than those in power might contemplate.