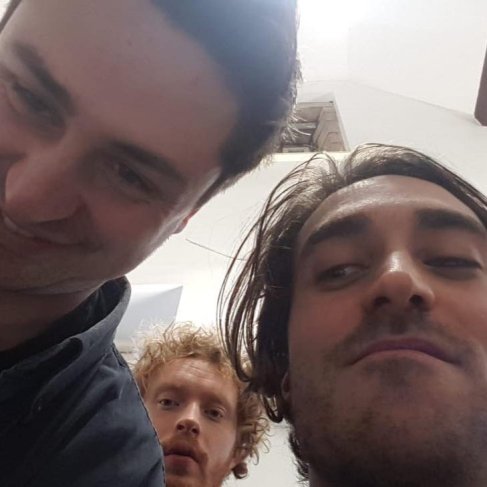 It’s small and blue, bigger than a matchbox, but smaller than a letter box.

This is The Box.

It looks as if it could contain a ring. Or perhaps a badge, maybe a pendant? You could probably get a small necklace or a bracelet in there. Maybe it’s not jewellery at all, there could be a pair of cufflinks in there, or maybe something boring like earplugs?

This is The Box, and we need to proverbially think outside of the box to figure out what’s actually in it.

The Book Of Now by Royal Welsh College of Music and Drama alumni Dalton $wine Clwb is the maddest shit that you ever did see, and that madness is all centred around the intolerable mystery of The Box.

It resides there, centre stage, like some kind of operatic diva hogging the limelight. The three lads of the Dalton $wine Clwb are absolutely terrified of it, they are under its spell and so too are the audience.

There is an urgent and all-consuming need to know what is in The Box, but there is a huge, huge, huge problem. A really big problem: these three lads are completely and utterly off their fucking heads.

Do you drink planes for breakfast?

The Book Of Now starts hard – strobe lighting and thumping disco-electronica brings the lads bursting out onto stage for a bout of manic hyper-dancing. They say that the groove is possessing them, that their bodies are not their own.

It certainly does look that way. Are they on drugs??! [¹]

What happens next is extraordinary. Dalton $wine Clwb go off on one: the introductory scene involving The Box immediately sets the mood of abstracticity, but that is actually the last moment of anything resembling sense – everything that follows can only be described as chaotic theatrical mania.

The mania is strangely compulsive: the lads start telling stories, it briefly holds a connection to The Box mystery but then soon disappears into a magical rabbit hole of psychotic delusions and hyper-surreal extrapolations.

Everything is so exaggerated, and just as one line of inquiry begins to develop, suddenly the subject is completely changed and bewildering confusion reigns; each time it happens the disorientating perplexity of it all seems to grow exponentially.

Every other teacher becomes a cupboard

What has basically happened here is three lads from Wales were presumably having a perfectly good night out (out) on Canal Street, but then they ended up wandering into Piccadilly Gardens to score some coke [¹]. And then when they did that, they figured: well, we might as well finish it all now. [¹]

And of course they then need to tell everyone about it.

And of course there is no way we can ask them to stop and go over that bit again. The best thing to do is to let them finish, allow them to burn out and then see if there’s any chance that we can make sense of even the smallest bit of it.

Dalton $wine Clwb spin up a fantasy world of outrageous characters, including the mysterious Biscuit Manager, and of course The Box. It makes no sense at all yet somehow it works, ironically precisely because it is just so completely warped that the deranged lunacy of it all eventually becomes the focus of the viewing experience.

This is a show that is very cleverly constructed around the mania itself, there is the tiniest hint of a coherent plot centred around a medieval baker searching for enlightened truth (honestly) but other than that it’s a full-on discharge of lusty theatricality – this is physical comedy, physical tragedy, physical romance – physical everything.

A point is reached when things get so demented that a strange truth begins to dawn – maybe the story / plot is irrelevant, maybe sometimes outrageous theatricality is all you need to be entertained. Perhaps that’s true in all cases?

The Book Of Now is a brilliant piece of writing and an outrageously well performed feat of acting. The script for this play must look like the worst ever case of predictive text gone completely and utterly wrong; this is easily the most unfathomable thing I’ve ever seen in theatre yet it’s so very compelling – a show that’s kept motoring all the way till the very end by nothing more than raw, concentrated big-performance energy unleashed at an unrelenting pace.

[¹] – There is no evidence that the members of the Dalton $wine Clwb are hardcore drug users.

One thought on “The Book Of Now”