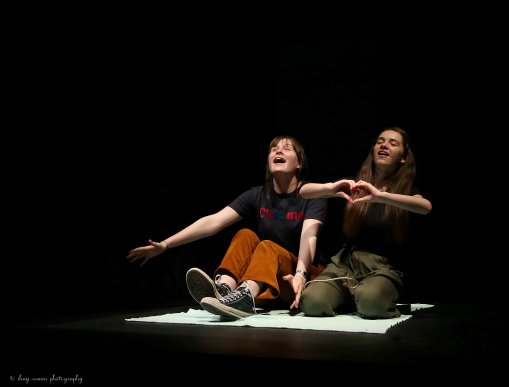 Things are not the same. Everything changes, and I hate it without you.

Michelle (Emily Cox) and Jane (Libby Hall) are inseparable sisters with just three years between them. Theirs is a happy life of playing in the park, games of hide and seek, dressing up dolls; but as they progress into their teenage years events within the family appear to be driving them apart – and neither seems capable of stopping it.

Drowning In Silence is a deep and moving search for answers from a complex and emotional quandary that only seems to serve up ever increasing levels of distress and despondency for the main characters.

Much of the play is delivered as a prying peek into the private world of sister chat; both performers striking an impressive balance between playfulness and rivalry; only towards the end does anything like argumentative bickering emerge.

The unfolding story regularly breaks into mini episodes of deeply contemplative grieving, most specifically from the elder sister Michelle. This generates an intriguing element of mystery that seems to surround the entire play until the very end. Who is actually grieving? And for whom?

The missing detail is what makes this an intriguing and absorbing experience, despite the clearly melancholic theme. The sisters play out a story of secrets and lies; the crossing of sisterly boundaries; and the frantic burying of secrets and emotions – yet the audience are only ever fed the smallest of clues as to the root cause of their situation, never quite enough to explain it fully.

The result is an impressive cross between a theatrical tragedy and something closer to a thrilling mystery. There becomes a strong need for pragmatic answers to explain the sisters’ predicament, the mind boggles as to the possibilities, but the plot cleverly fails to deliver till the very end. 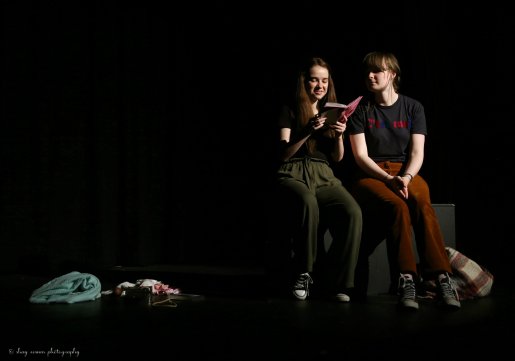 Laid out as an hour of slow contemplation on the nature of grieving and loss, the manner in which the story is drawn out is delightfully impressive. The final scene delivers a shocking twist, which felt as if it was always coming by virtue of the superbly crafted sombre mood – yet when it did arrive it was still crushingly sad and heartbreaking.

Drowning In Silence is a simple yet effective piece of theatre combining convincing performances with pensive video clips, clever lighting effects and a perfect soundtrack of melancholy piano music. This may be a deeply solemn and subdued story, but it’s told in an impressively entertaining and pleasing way.