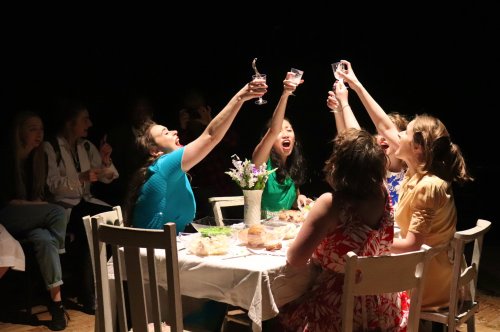 “I am taking my vagina,” she said.

“I am taking my structured vagina. Yes, that is what I am doing. Taking my vagina.”

A deeply notional and abstract concept? Somewhat hypothetical maybe, perhaps a meta-theatrical allegory? One which requires interpretation by the audience in order to uncover hidden meaning in amongst the muddled context of cultural standards that forcibly drive the suppression of female behaviourisms?

Compared to the rest of the show though, these were lines of relatively lucid clarity.

“Revolt. She Said. Revolt Again” is the debut show by Bristol-based Blue Sole Productions – an extraordinary union of female theatre extremists who seem highly motivated to take conventional theatrics and stick it straight up your (structured) arse.

It all looks very standard to start with: four immaculately presented women in very neat and tidy frocks. No one wears a frock anymore, even the word is barely used. But here they are, these frocks, very prim and proper. And they’re worn with sensible tights, the theme is 1950s domestica, the music definitely gives it away.

So it seems this is a play about some shit that went off in the 1950s?

But even before the show starts it’s clear that there is definitely something more going on here. This Blue Sole crew is huge, they roll deep – not just the four stars on stage, there appear to be dozens of them; they have some kind of Project Manager wandering around pre-show setting things up and moving people around. Dressed in black, carrying a clipboard and sporting a headset with sticking-out microphone; she looks like she’s about to micro-manage the shit out of this. 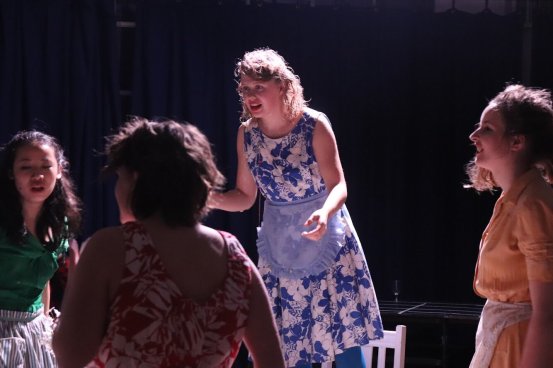 “You are fearless, and you are peerless,” they say.

A pretty little play about some shit from the 1950s this is not. The opening scene is a work of genius. Frock Rocker Sara-Robyn Pang delivers a glorious 15-minute-long sex scene of the kind that you just couldn’t make up – except these ladies did, and it’s brilliant.

Pang looks all prim and proper but she’s burning hot like a nuclear reactor and all she can do is write it all down. It’s the equivalent of phone sex when there were no phones, just a pen and paper. So she scribbles away, all prim and proper, neat handwriting too, yet her thoughts are just pure filth. She makes it very clear and very transparent what she wants to do, most notably with her structured vagina.

Pang absolutely hits the nail on the head, somehow capturing the crazy frothing-at-the-mouth and snot-down-your-arm moment when phone sex switches from hesitant nerves to the animalistic self-certainty that you just need. to. do. this. fucking. shit. right. fucking. now. 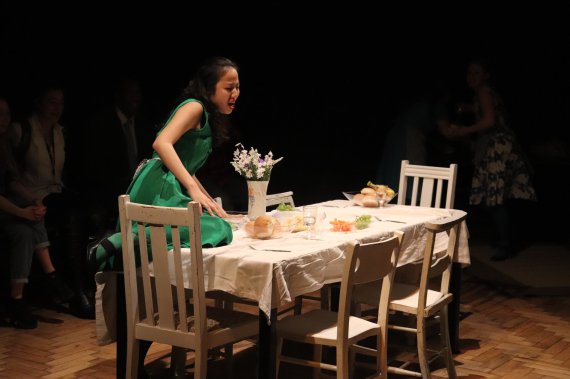 From this incredible start the performance progresses in an extraordinary and bewildering way. The show has no particularly coherent structure, no plot and no story-line, it could be considered as being a series of sketches or even some sort of cabaret act maybe.

The fourth wall is broken with the return of the micro-managing PM. Layer upon layer of theatrical deconstruction follows, even to the point that an HR dispute erupts about one of the Frock Rockers taking Mondays off – prompting wild conjecture about cancer and/or pregnancy.

But she just wants to take Mondays off.

The show’s mood changes are wild and they’re slightly difficult to follow but once you stop giving a shit about what it is all supposed to mean and how awkward it seems to look the performance takes on a bizarre character that makes it fantastic to watch.

The comical scenes are truly hilarious, the highlight being the simply dreadful moment when an innocent civilian member of the audience (a middle class person of male persuasion) is pulled on stage and forced into an arranged marriage with a Frock Rocker without his consent. But it wasn’t actually about him so that was brushed over. 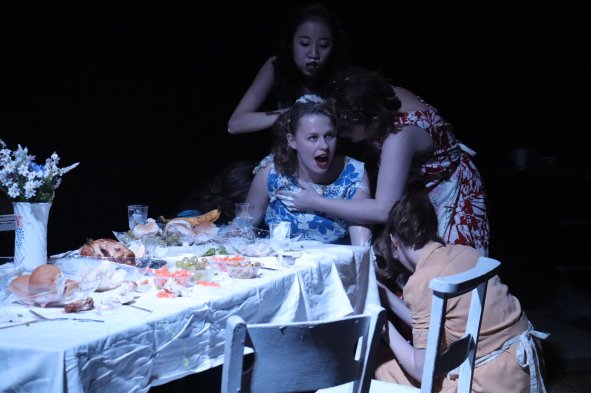 There does appear to be a serious point to all of the madness, evidenced by the more serious sketches. It’s not all fun and games, what Blue Sole appear to be trying to say is something along the lines of:

Eventually it came to an end, an end in which the very, very strong smell of sponge cake and roast chicken filled the air – clashing in such an incongruently displeasing manner that it felt as if said substances were actually airborne and being inhaled directly into the lungs – which they actually were to be honest.

Finally, there was a hip-hop rave, and then the audience were forced, against their will, to deliver tantric chants of hyper-curious intrigue.

I swear I’m not making this up.

If you like your theatre to be all *hakespearey then you need to stay the fuck away from this – “Revolt. She Said. Revolt Again” is the hard Brexit that establishmeNT theatre needs to run away from. Right now.

But if you love a bit of extremist theatre, something abstract and surreal, perhaps you like it with a bit of big pussy energy; if you love it when they Fringe like that then this, well this is right up your street. Possibly the finest hour of the 2019 GM Fringe Festival so far.

One thought on “Revolt. She Said. Revolt Again.”