New York City: the Bronx – in a run-down dive bar the most aggressive flirting in the history of the human race is taking place.

Danny just wants beer and pretzels, he definitely did not come to sit and chat shit to a stranger who doesn’t even know him.

Roberta also wants beer and pretzels, but she’s game for a wind-up and there is no way she’s leaving him in peace.

The opening scenes of Danny And The Deep Blue Sea are extraordinary. With most of the audience sipping on their own drinks, it genuinely does feel like having been transported into the fiery heart of a bar-room brawl that’s just seconds away from a cataclysmic eruption.

The anger is so real it’s almost difficult to actually watch. If you ever did find yourself in the kind of New York bar that these opening scenes depict, you would have lasted about two minutes and then would have called 911, the FBI, the CIA, the NRA, the NUS; you would have rung anyone who would have listened.

These are characters who seem beyond angry, they don’t even know each other yet they’re absolutely fizzing with rage and contempt.

The energy emanating from them is incredible, it’s impossible to work out which of these two is the worst, who has the shortest fuse, and who will blow first?

These are genuine stare-at-the-floor moments of maximum awkwardness, though without doubt there is a lusty and inquisitive need to now know what the fuck this is all about. All of it is utterly compelling, these are easily two of the nastiest characters that theatre could possibly conjure up. 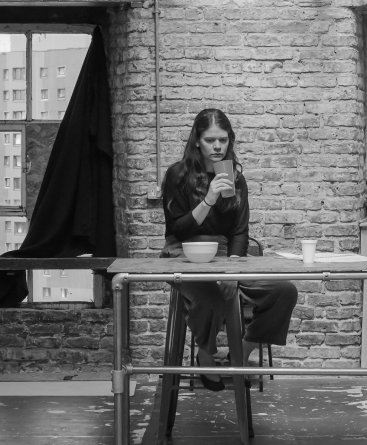 But then something rather strange and clever happens, and it happens while Danny and Roberta’s drinking and shouting war is raging, it’s an imperceptible change; not in mood, but in direction.

Remarkably, they actually seem to bond over hatred, these two both admit that they don’t like people. Then there’s hatred of their fathers, even a shared hatred of the fucking drunk jerk who Danny thinks is staring at him, but actually he’s just some pissed guy in the corner, totally out of it.

Danny And The Deep Blue Sea is an acting masterclass by Hannah Ellis Ryan and Danny Solomon: not a single second of it looked as if it was being acted, it really did feel like being in a bar trapped in the inescapable mire of a really awkward altercation. The facial expressions, the body language, the spoken language, everything was crystal clear and precise, at no point did it feel as if there was a scripted line anywhere in this performance.

From an incredible start which sees it instantly accelerate into a high gear, Danny And The Deep Blue Sea then sneakily begins a gradual descent and calms down to something slightly more peaceful and tranquil – something that feels as if it makes sense.

Compared to the mind-boggling start, it ends rather satisfyingly and pleasingly in something close to a mood of relative sanity.

Danny and Roberta are just two people are searching for normality, they can’t find it on their own, and when they try to find it with each other they inadvertently spark a Big Bang explosion rather than a flickering eternal flame of love.

“I ain’t too good at people”, says Danny: he may just have met his perfect match in Roberta.