This is Our Kid: Jimmy James McGrath.

The heavy door creaks, it stutters open and he cooly slides through it like some kind of monstrous shadow: he’s clad in United’s black away top and a terrifying black balaclava, on the table lie two cans of Stella and a bunch of white lilies.

He steps in and looks around.

This could be the opening scene to the greatest Milk Tray advert that was never made, but if it were it would be the most Mancunian thing you ever did see. Especially as the backing track isn’t a filthy saxophone tune but the gnarly opening bars to I Wanna Be Adored.

Our Kid Jimmy keeps banging on about His Kid Tommy – his younger brother, a proper legend it seems, one who sets his own arsehole on fire and gets to miss two weeks of school as a result.

These two are Salford lads, theirs is a world of football at Old Trafford, football at school, football stickers, and football in just about every other way.

And in the case of Our Kid Jimmy, it’s a world of violence coming from a source which you wouldn’t expect.

Our Kid is in a world of gangs, a world of Mum’s new tosser boyfriend, a world where Our Kid and His Kid get through by first sharing toys, then beer, then drugs.

Our Kid is a proper piece of Manc theatre: set on the streets of Chorlton, Moss Side and the relatively obscene opulence of the pizza and prosecco bars of the Northern Quarter; and serenaded by the most Mancunian of soundtracks, stonking classics every single one, and each perfectly placed and cued to satisfyingly punctuate Our Kid Jimmy’s wild story.

Taran Knight expertly delivers a one-man show with a fizzing energy which cannot fail to impress. Amusingly, the show comes across exactly like the one-hour-long pissed-up live stream that you’d get if you ever made the mistake of going up to THAT wired fella in the King’s Arms and asking the question that you should never, ever ask a stranger in a pub in Manchester: “y’a’right r kid???” 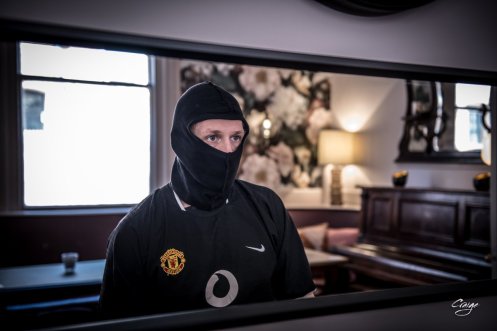 Knight might be performing on his own but he concocts a whole city (don’t talk about City in front of Our Kid) full of extraordinary characters: United fans, City scum, brickies, druggies, boozers, Our Kid, His Kid, some Salford lads, Strangeways – there’s plenty there.

As a piece of writing this is an hour-long yarn involving some of the seedier aspects of street life and volatile family relationships, and it’s a good one. Jimmy James McGrath’s story is one of naivety and betrayal, double betrayal and treble betrayal. Knight has created real lives, dealing with the real shit on the streets that is probably deemed commercially unviable through the lenses of establishment theatre commissioners, hence it resides satisfyingly in the realm of fringe theatre, and is a great example of it at that.

Unfortunately for him, he didn’t count on what others would do to him.