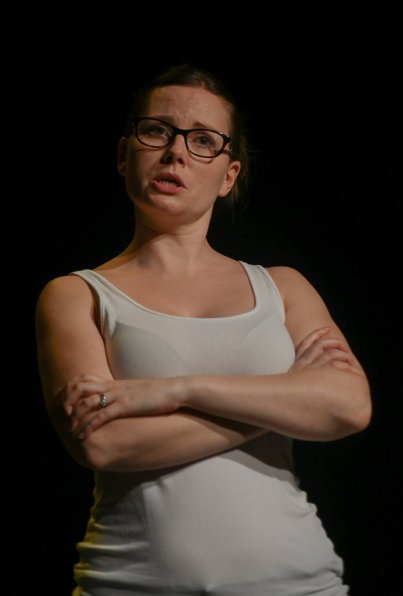 It started with a cheap bottle of rioja.

Dawn Peechman is 33 and about to become an International Sales Representative. She’s big in pharma and has a massive new job lined up, abroad, in the sun. Big money one presumes. It’s all looking good.

So why then is she moping around a gloomy attic in a cowskin onesie???

A Quick Guide To Ruining Your Life tells the rather sorry tale of how someone can slowly and imperceptibly get sucked into a spiral of lies, bigger lies, and then lies about the lies. To the point where invoking the supernatural becomes a very good way out. To the point where no one can even remember the question anymore.

Dawn’s twisted predicament has seen all of her personal relationships become electronic. The real world human beings are now only accessed via the gift of Instagram, text messages, or emails. To compensate she makes a new friend, a virtual one – the gobshite Amazon Alexa, whose super smart AI engine soon starts dishing out more than just practical search results from the internet.

Alexa, how should I aspire to be?

Alexa, what is an alcoholic?

Some questions are probably best left unasked, especially to an internet know-it-all. 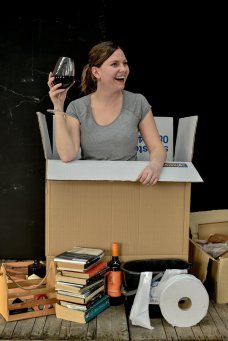 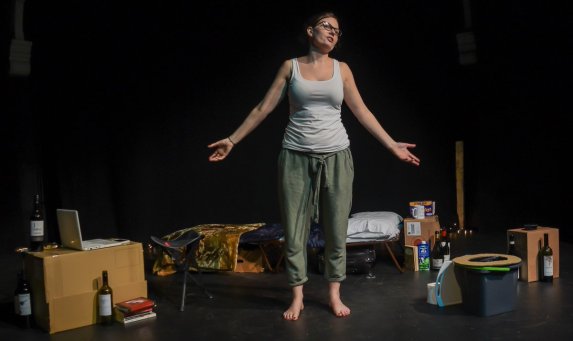 To be fair she didn’t mean for it to happen like this, and things did start out reasonably well for Dawn: she pulled off a great job interview via Skype from the living room. But it took just a couple of red wines to then stumble into a snarled and knotted world wide web of virtual and physical nonsense.

Diana Atkins’ performance delivers a healthy dose of believability and frustration: spinning one online lie into another is something we’ve probably all done; having it career horribly out of control is not a thing anyone wants to think about. So there is sympathy for poor Dawn, but she did bring it all on herself.

As she constructs a bubble to cover herself, she can only cower timidly as it crashes down on her from above – her big, horrible web of lies ends up trapping and exposing a sickening deception affecting those around her, in a way that she absolutely did not want.

If you want a short, sharp quick guide to ruining your life, this is absolutely it. Wonderfully compact and precise, yet so heavily loaded with mega cringe factor and awkwardness. The twist at the end is exquisite, both hilarious and satisfying,  a warm and satisfying dose of pure theatrical justice.

The moral of the story is surely this: if it started with a bottle of rioja, well ….