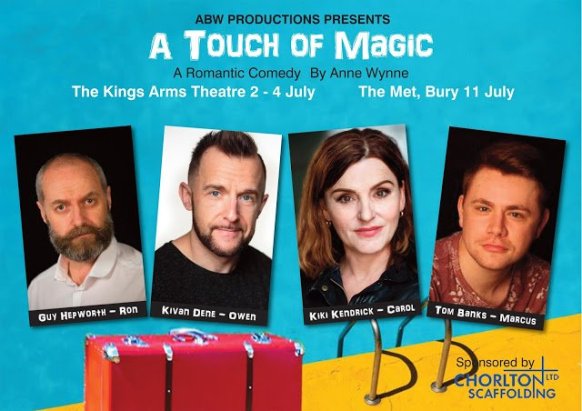 35 years. You’d get less for murder. Much less.

And after seeing the state of Carol and Ron Turner’s marriage you might well actually resort to murder.

The Turners are on holiday. Looking to make sure his Mrs has a good time, Ron books a relaxing fortnight away in sunny Tenerife, surely the perfect way to celebrate a big wedding anniversary?

The champagne flows, the lobster is ordered, there’s sun, sea, sand, there’s even the smallest and tiniest possibility of sex – it’s a holiday that couldn’t possibly go wrong.

But two things seem to be preying on Carol’s mind: kicking a cigarette habit that’s as long as her marriage and a rather bizarre obsession with knowing that their fully grown-up daughter Mags is ok back home.

A sneaky little cigarette break leads to a chance meeting with children’s entertainer Owen – cue a wild and boozy chain of events that leads to the emergence of a shocking secret.

A Touch of Magic is a raucous hour of what’s billed as a romantic comedy. Star of the show is Kivan Dene as the outrageous Owen, a flamboyant showman who’s as wild and boisterous as you’d certainly have to be if it were your job to entertain a bunch of annoying brats.

Kiki Kendrick (Carol) and Guy Hepworth (Ron) also do a great job as the annoying couple – a fairly standard pair of Brits abroad, a seemingly pleasant duo who look normal enough but who also offer the rather amusingly delicious prospect of clearly being ready to fly off the handle at any moment.

With plenty of laughs and smutty seaside sauce, and even a free Eezy Freezy Squeezy Vimto ice lolly at the start of the performance, A Touch of Magic reinforces the old rule that, sometimes, what goes on tour should stay on tour. Unless it’s a secret as big as the Turner’s – in which case you might as well just keep downing that champagne and permanently stay on vacation.