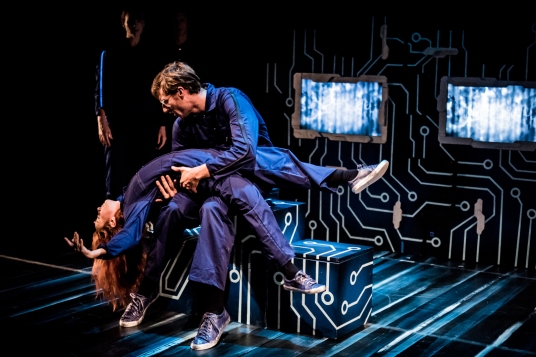 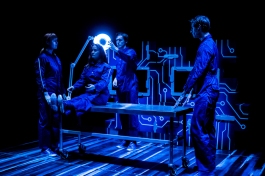 Your mind is just software: update it.

Death is just a disease: cure it.

We are Beyond Belief™: believe in forever.

Welcome to the astonishing world of Beyond Belief™: a hi-tech corporation who will usher forth computing innovations from the future in order to being back the rocking good times of your past.

The geeky R&D nerds at Beyond Belief™ have been pushing and pulling at the boundary between software and hardware, now these techno-boffins stand triumphant with their latest service release: nothing less than the ability to resurrect the dead.

Well it’s actually quite simple really: first they’ll just Google you, then they’ll carefully scrape all your digital content off the internet before loading it all onto an embedded microchip which will then be implanted back into your festering corpse so that you may rise once again to luxuriate in the sentient glory of being.

And that is exactly what poor Simon discovers.

Simon and his wife Chloe 1.0 are living a perfectly happy existence, one where they prance around elegantly in stylish boiler suits choosing to express their uncontainable love for each other through the medium of electro-erotic contemporary dance.

So along comes the Executive Director of Sales at Beyond Belief™, giving it all that with a highly seductive, strategic solution for Simon’s overwhelming grief. The poor man just can’t resist, the sadness he feels is unbearable. He feels like shit and he just wants her back.

But the resurrection is a crushing failure: yes it’s a resounding technical success for the goofy boffins but it is nothing short of a complete disaster in terms of Customer Satisfaction metrics.

It turns out that Chloe 2.0 is just a complete digital arse – like that Facebook update from Most Recent to Most Relevant that absolutely no fucker anywhere actually asked for. This all-new Chloe 2.0 software & hardware bundle is completely lacking in any kind of banterific value, she seems to have turned into some kind of turgid, over-hyped cyborg spewing a whole load of asinine yeah-yeah-yeah-whatever-ness.

It’s a horrible, double heartbreak for poor Simon: the hope of having initial pain alleviated cruelly scuppered and replaced by yet more grief – like a phone-check with No New Messages followed by the agony of staring at a double-grey-tick WhatsApp message which remains unread even though the fucker is clearly “online”. 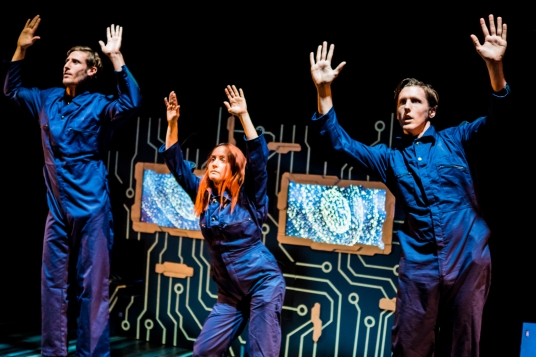 Beyond Belief by Tmesis Theatre is an awesome denouncement of just how much of a dickhead everyone has become as they increasingly spend more and more of their time online banging on about this and banging on about that without actually banging anyone or anything in real life.

The show is a beautiful thrill-ride which swings quickly and wildly from scenes of on-point hilarity to genuinely unpleasant moments of pure horror.

One moment there’ll be a sensational comedic twist as the hipster ghost of Elvis suddenly makes an appearance at the gates of heaven in order to counsel the soul of Chloe 1.0; the next moment there is appalling terror as poor old Simon drops to his knees, physically shuddering more violently than a rusty old washing machine dropping revs as he unleashes a terrifying-looking primal scream from the realisation that Chloe 2.0 is just a wet sponge spouting some crusty old Facebook shite from back in the day. ²

Beyond Belief is a beautiful-looking and elegantly-flowing theatrical manifestation of a deep and dark nightmare, with strong hints of Frankenstein and The Human Centipede, as well as more than a little bit of Orwellian 1984 also sprinkled in.

Ultimately it’s a savage and ferocious attack on the 99.173847% of all people that piss around too much on a smartphone; but sometimes, especially when the stone-cold logic is put across as well as this, you have to just admit that yes, I am a bit of a twat and I know I am, but then so is everyone else, so we’re all the same really.

¹  I believe that is what they are trying to say to the audience: you’re just a walking, talking Facebook / Twitter dickhead with no actual soul.

² Or maybe that’s what she was all along??