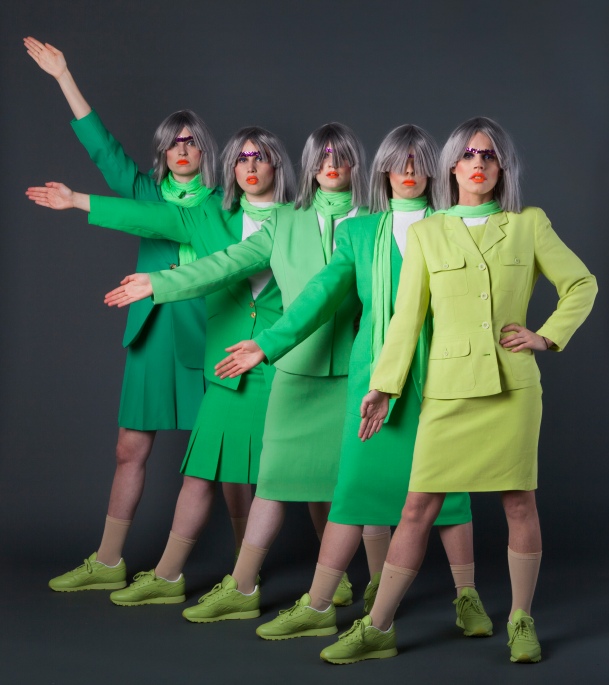 Often, on stage, you see things that you just immediately fall in love with: artistry that inspires and delights, mind-bending performance that seduces your sub-conscience into a realm of such extreme pleasure that you don’t ever want to leave.

Often, on stage, you might also see something so excruciatingly awful that you want the whole freaking universe to just implode at the sub-quantum level, so that no reconstructable trace of that artistic atrocity can ever manifest itself again.

It’s definitely not often, that, on stage, you see a show that does both.

Created and performed by Figs in Wigs – a quirky quintet of professional theatre extremists – Often Onstage is a reality-theatre exposé of what really goes on behind the scenes in a stage performance.

Rather unusually, the show starts with the aftermath of a show ending. There is little indication of what that unseen prequel to the main event is, but whatever it was it must have been one hell of a performance: the triumphant cast depart and return to the stage eight or nine times to gleefully take ovations from the audience, in fact it goes on for so long that towards the end they literally have to demand praise rather than be given it.

Dressed in their purple Cadburys Dairy Milk-sponsored harlequin outfits with fluorescent yellow socks, the Figs make an “acceptance speech” imploring donations to help fund the completion of a much-needed roof for The Globe – a little dig perhaps at the *hakespearian extremists who currently control the fake news media of conventional theatre world? There’s even a bunch of flowers from one over-enthusiastic pitch-invader; these would be absolute scenes for anyone involved in the theatre game, if it were all real.

Eventually (after what seems a little bit too long) the fake adulation ends. The faux pretence of theatrical self-congratulation is shattered in just seconds: the house lights come on and the Figs return to their non-acting selves: rather mundanely and boringly stripping out of their costumery, dismantling the set, and clearing up the stage ready for the next performance.

This behind-the-scenes revelation of how the razzmatazz of show business as we know it is cleared away in just a few moments, and how the trinkets and paraphernalia of a new performance can be so quickly and easily put into place is quite unnerving. As the Figs scurry around doing their sound checks, testing and arranging their new props, and taking the opportunity to do a few very-last-second rehearsals, there’s a terrible sense of cold loneliness in the audience, an awful feeling of emptiness in having to accept that a thing that we covet so much might actually just all be a web of made-up fakery.

And that feeling gets worse, being sat in the bright lights as the Figs literally and figuratively dismantle the theatre around you is a troublingly terrifying experience, it should perhaps come with a trigger warning (I’m serious).

The arse-end of Home’s Theatre Two is fully exposed, it’s maybe as ghastly as, I don’t know, accidentally seeing your parents naked? For the first time ever the mega curtains at the back of the stage are pulled back and the hideous nakedness of the back wall is revealed. There’s a mysterious shutter there, and when it’s eventually rolled up it reveals a previously unknown backstage storage dungeon. There’s a big Sports Direct bag in there, and some scaffolding, just a whole load of general crap really.

Some of the best performance art I’ve ever had the pleasure of experiencing has been in Home’s Theatre Two – yet now I’m staring deep into its arsehole and it’s so very upsetting.

From this rather despairing and genuinely upsetting midpoint, Often Onstage then suddenly takes off in an extraordinary way. What follows are effectively a series of separate sketches: unconnected scenes that can only be described as gratuitous theatrical outbursts. Maybe they do have some deeper, connective meaning, or maybe it’s just the Figs showing off – either way they are mind-blowingly good spectacles and lift the audience perception of this show out from the depths of furious and uncontrollable rage to the soaring highs of marvelling at wondrous artistic excellence.

The 1960s psychedelic disco funk routine is a startling union of on-point musical excellence paired with perfect accompanying dance moves and costumes – architecturally the scene bears no connection at all to anything that has gone before and nothing that follows, but it is, without doubt, one of the straight-up, stone cold funkiest things that you will ever experience with your actual eyes and ears. It comes out of nowhere and it properly blows your mind.

Similarly, there’s a 1980s-themed piece, a much slower-paced and much more abstract routine that seems to rather bafflingly be all about doors. Knocking on doors, multiple doors opening and closing, bells ringing, knockers knocking, ungreased hinges squeaking and squalling, trap doors swinging open. Yet again, it’s plain and simple theatrical insanity of the highest order, but add in the dance moves and suddenly the frothing-at-the-mouth rage of “What the actual fuck am I actually watching here?” is suddenly and refreshingly replaced by “Er, this shit is so fucked up but it’s actually stupidly good you know”.

Comedy is introduced in the form of a sketch showing that time when the Figs sold out and made a corporate training video, rammed full of the kind of stupid motivational phrases and slogans that would make David Brent squirm in embarrassment. But highlight of the night is undoubtedly the completely random and unexpected climax (and I nearly did) that is the Figs’ Backstreet Boys tribute, with the most incredibly well timed stage entrance that I have ever, ever, ever, ever seen in my life.

Often Onstage so nearly became the worst ever crime in theatre world, the inhumane atrocity that an innocent civilian audience member cannot forgive: the inside job – the dreaded play by out-of-touch theatre extremists that only other out-of-touch theatre extremists find funny, or even understand. The kind of inside job that would compel innocent, civilian audience members to rise up, grab hold of one of the giggling drama students around them, put them into a headlock and whisper vicious threats about spending money in the cinema instead if they ever produce crap like this when they graduate. In fact, it probably still remains as an inside job, but it just so happens that what the Figs did eventually deliver was incredibly good.

The Figs are definitely theatre extremists, they’ve basically toyed with the civilian audience and got away with it. Their backs were against the wall, the civvies were lining up to take aim and open fire, but somehow they performed their way out of it. It still remains a total piss-take that this show begins with the incredibly annoying spectacle of theatre people making insider jokes about theatre, but, in this particular case, when they actually set about doing their thing it’s stunningly impressive.

Often Onstage is an absolute pain-in-the-arse of a show. It’s that heart-pounding, blood pumping irresistible urge to send that 2am “U ok hun?” text to the scumbag bastard who otherwise treats you like shit during the day. It’s that reckless lust that leads to a 12” pizza for dinner when you know you’ve not eaten a piece of fruit in about four years. I hate the Figs for what they’ve done to me, but I just can’t get enough of the way that they do it.