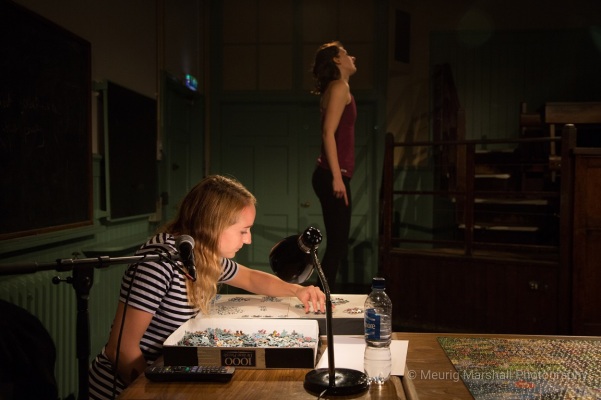 Jigsaws and trampolines: distant childhood memories for most people, but for Sophie and Leah they seem to hide deeply embedded secrets that neither looks likely to ever escape from.

Lands by Antler Theatre is a beautiful jigsaw puzzle of a play, one which seems to begin as a seemingly incomprehensible jumble but once the pieces start connecting a fascinating and warmly entertaining performance eventually emerges.

Up on stage Leah is sat at a table with her head under a lamp, she carefully studies piece after piece of her new jigsaw nemesis, taking time to get to know her enemy – Puzzle 939b. This is world-class jigsaw action, with Leah providing live commentary.

Piece 106 shows a woman in a veil, perhaps at a wedding, apparently in the background a small man is arriving at her breast, whatever that means. Piece 107 shows a bald man in glasses in a doorway, a solicitor perhaps, maybe he is outside a shop literally soliciting as a solicitor? And Piece 108 is nothing but leopard print, an incredibly exciting moment for all genuine fans of jigsaw logistics.

Meanwhile, just a few feet away, Sophie is casually bobbing up and down on a mini trampoline. Her pace is somewhere between slow and moderate – a little bit more energetic than a casually hopping crow, but not as vigorous as a scurrying pigeon. She seems to be eating something, but otherwise she’s just generally minding her own business really.

Unconventional as the visual spectacle is, things start off perfectly calmly and politely and an air of normality quickly spreads. But when Sophie casually drops her satsuma peelings on the floor it all kicks off.

So relaxed and serene are the opening interactions that when the arguments do erupt the audience is immediately plunged into the embarrassing position of not wanting to look – exactly as would happen if a loud and aggressive dispute broke out between two people that we know – and yet we know nothing about either Sophie or Leah, but we’re drawn into their mysterious relationship in a charming and alluring way.

There is an ever-present air of intrigue drifting throughout Lands concerning the exact nature of the relationship between Sophie and Leah. Are they lovers, just friends, housemates, teachers in a staff room, cellmates in an open prison? The truth never gets revealed and there’s a sublime eureka moment towards the end of the show when it becomes clear that it doesn’t make any difference – the precise details are irrelevant as their acquaintance is doomed anyway.

Most of the show depicts argumentative bickering, yet it’s done with hilarious realism. Both women enter into bouts of fierce aggression, yet each also steps back to reveal touching insights into their respective positions of anger. Leah confesses that she’s addicted to jigsaws, “they are my hell and my salvation” as she puts it. That prompts Sophie to confess a shocking secret about her trampoline use, which yields a touching response where both women work together to sort things out, but it’s not long before frustration gets the better of both of them.

As the show progresses, even though the set doesn’t actually change the visual atmosphere on stage begins to grow ever more sinister, leading to a wonderfully unusual ambience. Though they are both entirely innocent hobbies, neither jigsaws nor trampolines are part of everyday life and hence, together, as the show goes on they seem to represent a kind of unbearable Sisyphean tragedy – these two women seem doomed to repeat the same tedious thing again and again with no hope of a way out for either of them.

The mood changes induced during this performance are extraordinary. What is essentially an hour of foul-mouthed slapstick fooling around somehow manages to have the audience cringing with embarrassing laughter in one moment and then cringing with actual red-faced embarrassment the next. Lands is a proper theatrical rollercoaster, journeying into the emotional worlds of cruelty, despair, anger, injustice, deep sorrow; and plenty more.

There’s no better compliment that can be given to this show than to conclude thus: it convincingly, powerfully and realistically shows how one woman’s jigsaw addiction yields a devastating impact on another woman who can’t stop jumping up and down on a trampoline – and vice versa. It sounds completely insane but it’s true.

One thought on “Lands”