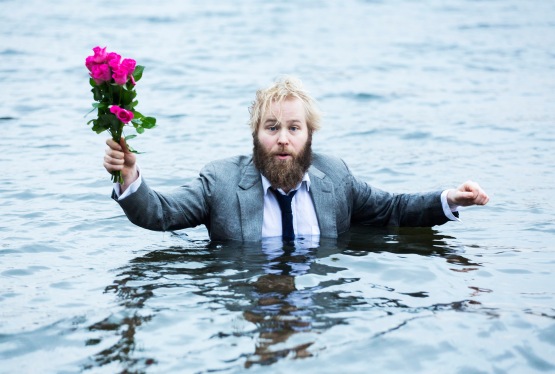 James Rowland of Tangram Theatre has got something on his mind. It’s probably best that he talks about it and doesn’t hold it in or anything, like most men do. He kind of doesn’t want to talk about it really, but, secretly, he does – he definitely needs to get stuff off his chest.

Even before the show starts he has the agitated, nervous demeanour of a man who’s both itching to get it all out of his system yet also self-consciously apprehensive about revealing too much. As the audience file in to take their seats and make themselves comfortable, James scoffs two bananas and knocks back a mug of tea – he has the nervy restlessness of a man re-rehearsing his PowerPoint slides just before he goes in front of the board of directors.

With just an electronic keyboard and speaker for company, A Hundred Different Words For Love is a one-man talk show that gets to the heart of why She was so amazing and thus why James is so sad. We know it’s serious because he can’t even bring himself to use her name.

This is the story of a two-year relationship where, as a couple, James and She somehow made it work despite being afflicted by mutual shitness, as he so fondly puts it. It’s the usual he-said She-said tale of awkward initial meets, naked frolics, arguments kicked off by tiny little things, unnecessarily wild giddiness from a weekend at Center Parcs, etc.

The narrative is centred around an actual story of what James did at his best friend’s wedding, loaded with multiple anecdotal digressions that begin to build a picture of how tiny tender moments conspired to forge something powerful between James and She.

Where it all seems to be heading to is the fact that James just can’t explain it all. The Greeks have six distinct words for the phenomenon known in the English language as “love”. The Inuit famously have fifty different words for snow. But James doesn’t have the vocabulary to explain all the subtle feelings and emotions that he experienced with She, and there is a strong sense that he certainly can’t explain in words just how sad he’s feeling right now.

As a theatrical creation, this show seems to drift a little too close to the border between stage performance and radio play – and that’s despite some good visual jokes and even a costume change. What doesn’t help is the subject matter: it is a very touching and moving performance and is very well delivered but the instant reaction to any guy banging on about his ex is to firstly let him talk for a bit and then when he doesn’t stop it’s a case of going to the bar and getting enough rounds of Jagerbombs in until no one can remember what the question was.

A Hundred Different Words For Love is a cleverly written and perfectly acceptable hour of theatre, James comes across as a funny and jovial kind of guy who definitely knows how to tell a good story. But given he feels like shit and just wants her back, the natural instinct is to launch a clinical intervention: splash out on a £20 haircut and beard trim deal, get Tinder / Bumble installed on his phone, let’s get this lad back to something like normal again. In a funny way this show is a victim of its own success before it’s even finished becoming a success – there’s no way in real life you’d let anyone (friend or stranger) go on for an hour about how great their ex was without doing something to bring them back as politely as possible into the realms of post-break-up reality.