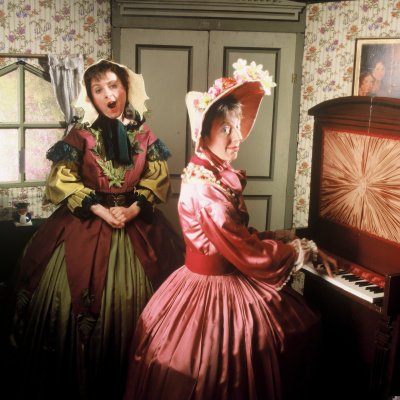 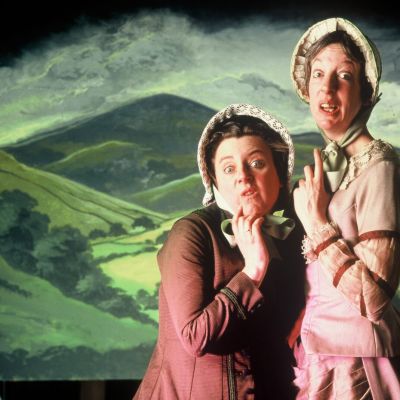 🎜🎝 Out on the wiley, windy moors; we’d roll and fall in green 🎜🎝

But not LipService Theatre, they know much better than that. They’ve seen the spirits of the dead rise up and walk across the moors – lost souls that are forever doomed to wander aimlessly in grief-stricken lament at a life left unfulfilled.

Freshly updated to coincide with the 200th anniversary of Emily Bronte’s birth, Withering Looks is a frantic, bosom-heaving (cue a withering look) celebration of the lives of English literature’s most famous sisters – along with some rather surprising revelations concerning the origins of their esteemed fictional creations.

Written and performed by the completely bonkers duo that is Maggie Fox and Sue Ryding, Withering Looks is theatre served up in a variety of guises – it’s mainly a stand-up comedy tribute act re-enactment dramatisationalised depiction type of thing; but then LipService have also rather conveniently turned it into a handy GCSE revision guide by providing brief interludes where they give handy answers to typical exam questions.

With elegant 19th century costumery and a front door that struggles to hold back the blustering wind-driven beauty of the desolate Yorkshire countryside beyond, the audience find themselves transported into the front room of the Bronte Parsonage in Haworth. Charlotte and Emily are intrigued by their new neighbour – the mysterious Mr MoreCock (cue a withering look) – a devilishly handsome man reputed be of of esteemed business acumen; and probably the only exciting thing ever likely to happen in a tiny village in the middle of nowhere.

While Charlotte frets over what the pesky London publishers will make of their latest works, Emily gets bored and keeps buggering off for a walk on the moors – alone, just as the sun is setting, and just as the shrouding mist rolls in over those dark hills over yonder. What’s the worst that could happen?

Well it turns out that they could all die of tuberculosis, but then we already knew that.

Things take a strange twist with a rather unexpected visit from the esteemed authoress Mrs Gaskell from Manchester (presumably arriving quicker on a horse and cart than most of today’s Northern Rail train services). And even stranger still are the closing scenes – the heartbreak of seeing Charlotte as the only one left still standing is just too much; so LipService finish with a fine re-enactment of the 1939 MGM Hollywood adaptation of Wuthering Heights, complete with the devastating sight of Cathy having to choose between Heathcliff and David Niven (cue a withering look).

Withering Looks is a laugh-out-loud episode of raucous slapstick funniness – the constant good-natured heckling from the audience was both encouraged and genuine, and, therefore, an undeniable sign that the show was well received. Given that it’s full of insider jokes and storylines it certainly isn’t going to convert anyone who isn’t keen on the Bronte canon; but for those who are it is undoubtedly a warm and reassuring reminder of why we’re right to be so in awe of the story of the storytellers.