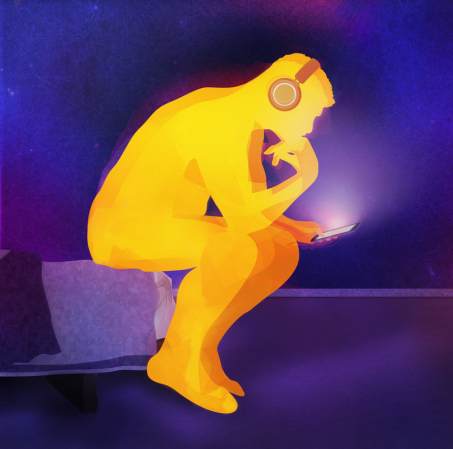 Guy is a young man looking for love, a graphic designer by trade, his professional and personal identities are much more electronic than they are human. And given that his physique is “built of chocolate and shame”, he knows that there is a time and a place for finding the right man and Canal Street at 4am on a Friday night is not it. So instead he’s sticking to the marketplace that he knows best: the internet, where, for gay men, the rules are the same but the game is different.

Guy the musical is part comedy and part tragedy. The comedy element is almost inevitable, given that the plot follows the titillatingly salacious details of how one man fares in his online hunting expedition. But the experience is not all fun and games, this is a show that starkly portrays the anguish and daunting self-doubt in having to properly find yourself before you set about trying to find someone else.

As was the case with production company Leoe & Hyde’s 2017 debut The Marriage of Kim K, the musical components of Guy are outstanding. A wondrous level of effort has gone into this aspect of the performance: the composition; very cleverly written lyrics; the careful crafting of a mood and ambience that fits the unfolding storyline – even the sequencing and transitions from sung performance to mere background sound effects are timed to perfection.

The pleasing manner in which this musical effort comes together is stunning, some of these songs sound and feel like classics, as if they’re musical pieces that everyone should already know. The strong theme of electronica is a little reminiscent of American act Owl City – a very distinct early 21st century type of semi-professional sounding dancey pop, a half happy and half sad set of songs that accurately seem to reflect the overall mood of the show.

Aside from the winking, blushing cheekiness of delving into someone else’s love life, Guy regularly touches on some quite serious issues on the gay dating scene: casual racism; body-shaming anyone who doesn’t have the perfect figure of a supermodel; and the incessant lying about who you are until no one can trust anything anyone says anymore. It makes for a complex story, one which occasionally becomes difficult to keep track of, but on the whole it’s a compelling one which contains enough twists and turns to attract attention until the end.

The cast of four led by Brendan Matthew in the lead role all give excellent performances, not just in the form of solo songs but also when performing as a chorus. Star of the show seems to be Seann Miley-Moore in the role of Aziz – a suitor for Guy who sports a perfectly toned body, the dress sense of a pop star, the confidence of a man on top of his game – yet someone whose outwardly impressive peacocking hides an insecurity and uncertainty that troubles him as much as it does anyone else.

On the face of it, Guy is a fairly standard theatrical saga of love and discovery. But rendered as a musical with the magical touch of Leoe & Hyde’s impressive production skills, this becomes a much more palatable experience which conjures up a variety of moods and atmospheres –  all of which serve to elevate this from being a standard attempt at a love story into being a much more pleasing piece of all-round theatre.