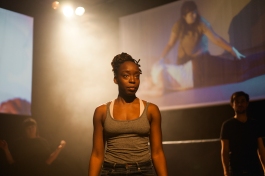 In 2017, the UK government’s anti-terrorism spending was just over three quarters of a billion pounds. There is now a thriving training industry delivering courses which allow ordinary people to prepare themselves for the various effects of a terror attack. And the advice from the experts who deliver these courses seems to be the same: the training needs to be realistic, and that means it needs to be distressing.

The Drill by Breach Theatre is a intriguing study of the effects that this kind of training can have and how fear of the very worst can infringe upon the very reality that you’re wanting to protect.

On stage are three performers, though none seem to be in character as such, the proceedings suggest that they are simply being themselves. What plays out is a series of mini rehearsals, training sessions you might call them. Each mini session starts with the Terror Training Trio devising a potential real-life situation in which they may be exposed to a terror attack. It could happen in the train station, on the street, at work – it could happen anywhere.

This is a show built on high tension. There seems to be an ever increasing sense of desperation as each of the mini rehearsals finishes and the next one starts. An attacker with a knife is considered, as is the possibility of an assailant with a gun. But in their thirst to ensure that they’re prepared, is it possible that the Terror Training Trio might potentially be losing the plot? Are they so completely consumed with being prepared (whatever that might entail) that they’re no longer even a part of the safe reality that they’re seeking to defend?

To assist their on-stage self-defence manoeuvres, the Terror Training Trio regularly seek advice from the back wall of the theatre, where video clips from actual terror training experts serve to explain why we should all be prepared and how we should go about it. The expert’s advice is clear and strong: the training needs to be realistic, and that means it needs to be brutal.

All of which leads to an interesting question that seems to linger menacingly throughout this show: is there any difference between the acting that you might normally see in the theatre and the acting that you need to do in preparing for a terror attack? Are either of them real, or are they both portraying a world that you’ll probably never realistically ever have to deal with?

The Drill is a tense and deeply troubling examination of the thing that we call “terror”. This is high-tension theatre that isn’t going to answer any questions, instead it will just plant a whole world of uncertainty in your mind. As a result it seems to invoke a sense of infuriating incompleteness, but then that may just be a reflection of the mind’s desperate need to make the lingering fear of it all just go away.