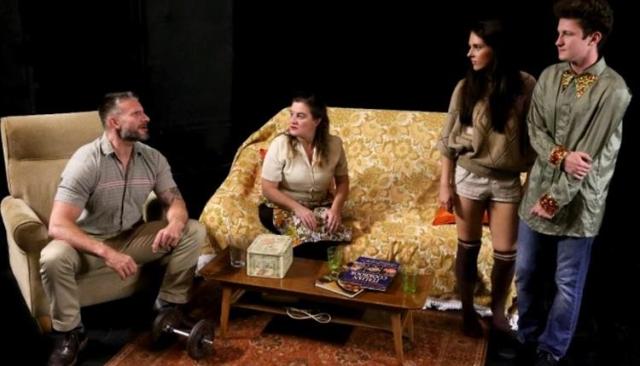 June 1972 and Longford Park in Stretford is about to spawn a monster. The appearance of David Bowie performing Starman on the television has lit a fire in the heart of a confused and isolated teenager. Now he suddenly knows where he belongs and where he needs to be – he just needs to find a way to get there.

Writer Tim Keogh won the Best Newcomer Award at the 2017 Greater Manchester Fringe for Thorn – a biographical depiction of how early life must have been for Salford’s second-most celebrated lad, the undisputed king of dour misery: Mr Steven Patrick Morrissey.

Less than a year has passed since Thorn made its debut, but a lot has changed since then. In fact, it has changed very recently, the re-emergence of this show couldn’t have been timed better: the old man with the thorn in his side hit the headlines just three days ago with a self-published interview in which, among other things, he attacks halal and kosher meat producers; criticises the way in which the Mayor of London talks; and then proclaims his support for a new far-right political party because they have the best approach to animal welfare.

Even his own fans are now turning against him, reluctantly conceding that the happy-clappy, flower-power light that never goes out has now actually gone out. There’s even a stylish range of Shut Up Morrissey merchandise available for those who now wish to publicly declare their pride at being through with his hate-filled, ranting irrelevancy.

All of which makes Thorn a surprisingly effective piece of theatre. The real-world events of the last few days weigh heavy on the mind as the story is delivered: here are scenes portraying a young boy faced with violent, hate-filled oppression, an innocent child seemingly surrounded by small-minded bigots. His friends at school, his hopelessly ineffective headteacher, the older boy in the National Front who gives him a good kicking, even his own father’s homophobia – everyone is out to get him, no one will just let him be. The only support seems to come from the two women closest to him: his mother and his older sister.

So whilst watching Thorn we’re meant to feel sorry for the teenaged Morrissey, we’re meant to cheer him on as he begins his fight for personal freedom. Pretty difficult to do given his older self’s very recent outburst in the real world. Yet incredibly, Thorn does successfully solicit a sense of sympathy towards the young man.

The show is made to be believable through a combination of factors, most notably the near-hypnotic power of the excellent music, and a convincing portrayal of unchallengable attitudes from a macho, male-dominated era that we know once did exist. This is a performance that spirals away from the recent real world enough to allow the playwright’s original, pre-April-16th-2018 tribute to the rise of an artistic genius to come through.

Thorn should be a celebration of a young man’s fight against a stacked system of macho privilege that so ignorantly suppressed him. Recent outbursts from the man himself suddenly threaten to jeopardise the whole ethos of this play, but it still works. You don’t need to be a supporter of the man himself to accept that the story of his earlier life is an interesting one which is well delivered by Thorn; in the same way that you don’t need to be a desperately miserable down-and-out in order to appreciate that songs like Everyday Is Like Sunday are the work of a musical genius.