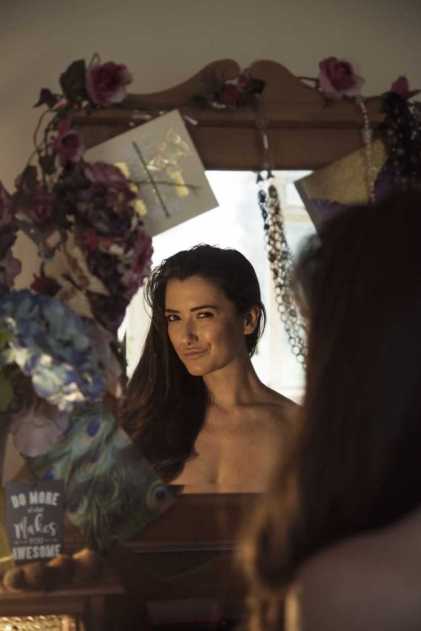 She expected the world to fall at her feet. And now she’s made it, with her own dressing room, lots of glamorous outfits to wear and all the make-up and perfume that she could want – all for free.

Rosie Fleeshman is both writer and solo performer of Narcissist in the Mirror, a rather strange tale of one woman’s efforts to make it as an actor, as well as make it in life more generally.

The strangeness lies in the fact that the shows seems to be autobiographical – the on-stage Narcissist talks about having a holier-than-thou brother and a little bitch sister, as well as a cigarette-puffing Scouse mother called Sue with an accent straight out of an episode of Brookside. Given the Fleeshman / Jenkins family’s acting credentials, and the fact that both Mum and Dad happened to be in the audience (note also that Sue Jenkins is the director), I initially found myself to be quite seriously offended – I thought I was being subjected to some inexplicably bizarre exhibition of mind-bendingly complex theatrical arrogance, a kind of family-wide narcissism maybe?

But it got too complicated to think about, and the feeling soon began to subside anyway. The on-stage Narcissist banged on about quite a lot of things, but when she talked about her exploits on Tinder the whole autobiographical family conspiracy triple-bluff theory was in doubt, because no one ever really talks about their Tinder game in public.

Narcissist in the Mirror is a collection of short stories, each carrying naughty dark humour alongside a more preachy undercurrent of being yourself, not worrying about other people’s perceptions, etc. Rosie Fleeshman’s delivery is excellent, lengthy sections of the performance are in the form of poetic verse – pleasing to listen to as well as serving to gather up and focus attention.

This show seems to partially follow a conventional story-telling formula and, as a result, there’s a tiny feeling of unfulfillment at the end. But that’s more than made up for by the strength of the excellent on-stage performance, and by the fact that this is a brilliant piece of innovative writing.

Performed at Home Theatre in Manchester as part of the Push 2018 festival.