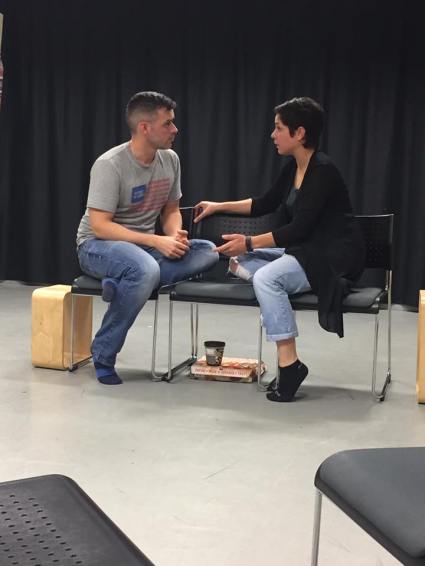 Jason is a self-declared “Preditor” – sounds unsavoury, but those with a job in the industry know what it means: he works as both a producer and an editor. Going by the opening scenes of A Grey Divide though, it would seem that he really might be a bit of a predator, as evidenced by his clumsy attempt to chat up the quiet and otherwise content Anna-Maria as she sits peacefully reading her book in a cafe.

Jason’s predation is soon stopped in it’s tracks though, just a few minutes after the embarrassingly awkward mating ritual starts, Anna-Maria drops a dating bombshell – the kind of revelation that should ordinarily send a chancer like Jason running for his life as fast as he could, possibly shocking enough to send him home to cower under the duvet and to vow to never, ever try to chat up a random woman ever again.

Yet Jason still persists, showing a level of desperation which defies explanation. Anna-Maria doesn’t seem to get it either, until Jason himself drops his own bombshell – the kind of revelation that should ordinarily send an opportunist like Anna-Maria running for her life as fast as she could, shocking enough to send her home to cower under the duvet and to vow to never, ever listen to any man ever again.

Played out entirely in amongst the intimacy of the audience’s own tables and chairs in the Nexus Art Cafe, Postcard Theatre’s A Grey Divide takes all the awkwardness and cringe factor of a lumbering and ungainly first date and plants it right in amongst the audience. As the two lovebirds play out their mating game in amongst the silenced observers, the show seems to deliver the kind of experience you might expect when an entire pub/bar goes quiet because two people are arguing – at first it’s all a bit awkward but then the voyeuristic desire to see what happens next takes over.

Marcella Hazel and Neil Procter take on the lead roles, gradually winding up the tension as their encounter just seems to go from bad to worse. Each takes it in turns to do the unthinkable for a first date: they choose to be honest with each other – the result is a shocking and ever-increasing rise in mutual incompatibility-ness. But just when you begin to wonder why they’re even bothering, it all slowly begins to fall into place and the initial friction subsides to reveal an intriguing possibility that these two might actually work as a couple – but only if they both see it and can understand it.

A Grey Divide is an amusing yet simultaneously distressing tale of two desperate people looking for love – individuals who are beyond sexual desperation and are instead looking for something far more complex, something that they themselves possibly can’t quite pinpoint. Played out as it is, in and around the audience’s private space, the result is an absorbing and compelling performance that delivers a welcome and entertaining twist on the usual formula of he-said / she-said theatrical love stories.

One thought on “A Grey Divide”