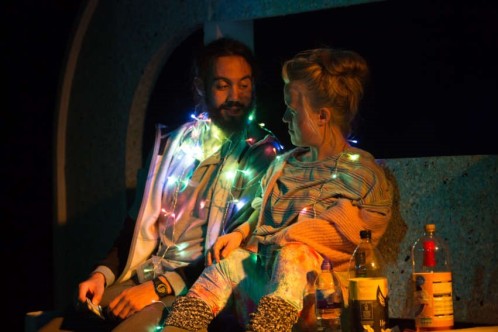 Mike the Geek: he can do you a disability pass that looks as good as the real thing; Dufflecoat Dave: he can get you some dog diazepam; then there is Integral Paul, Wheelchair Terry, and Hearing Aid Kev. Welcome to Skelmersdale in Lancashire a.k.a. Skem – where the characters are big and the issues they deal with are bigger.

Writer Jackie Hagan’s first play Cosmic Scallies is an eye-opening revelation – an assertive and foul-mouthed depiction of how disability and poverty can affect and mould lives in unpredictable ways.

The plot of Cosmic Scallies is thin, but that’s not what this play is about. Rachel Denning (Dent) and Rueben Johnson (Shaun) are the performing double-act who bring to life this volatile tale of a friendship being rekindled after many years apart.

Dent and Shaun grew up on the same council estate in Skem. Dent gets her nickname from Countdown’s Susie Dent, Shaun proudly points out that he invented it, mainly so that others wouldn’t call her anything worse. Years after they last met, an unlikely reunion takes place when Dent hires a handyman to help clear out her recently deceased mother’s belongings.

Dent seems to be suffering from chronic pain, but it’s not clear what’s causing the problem. She needs to get to the chemist to pick up a prescription and so Shaun offers to go with her. This simple premise of a visit to the doctors is the basis of Cosmic Scallies, which slowly descends into a mud-slinging, points-scoring war of words between two old friends.

Shaun wants to show that he knows stuff, despite not having a fancy education like Dent’s. He can offer private healthcare, albeit in the form of Dufflecoat Dave’s dodgy doggy diazapem. But Dent doesn’t want his help, she insists she can manage on her own even when it seems clear that she can’t.

The arguments are fierce, at first the whole show seems to be an awkward intrusion into a very private shouting match between old friends, but this might just be why Cosmic Scallies seems to get it right. The twin voices of poverty and disability rise up and demand to be acknowledged as the (unpopular) stars of the show – Graeae Theatre are providing some welcome relief here from the usual theatrical nonsense of he-said-she-said love stories being touted as the only human condition worthy of manifestation in a theatre.

Cosmic Scallies is a little gem, it may be full of comical one-liners but there is a really grim and sombre undertone which leaves a sense of uncomfortable shock. By definition 99.9% of theatre audiences in Britain won’t know what poverty is – no one would spend money on tickets if they couldn’t afford it. This show is different to the rest, it’s grittier and carries less theatrical sex appeal, but that divergence from the theatro-cultural norm is so refreshing, not every story needs to have a happy ending.

One thought on “Cosmic Scallies”