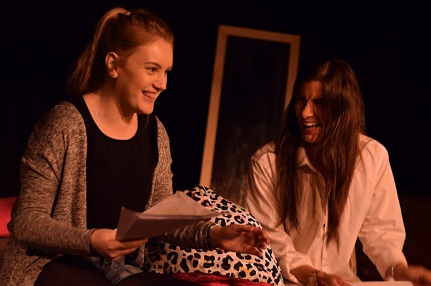 The Manchester theatre scene may consider itself a relatively liberal and enlightened corner of society but there are still plenty of topics that remain a little bit too awkward for polite conversation. Women talking openly about their sexual experiences and desires is probably one such topic, so it comes as a bit of a shock to see playwright Anna Jordan put the subject centre stage in her new play, Freak.

Just two performers are involved in Freak, each providing very different insights which only really serve to confirm just how complex this otherwise standard feature of human existence is.

Stacey Harcourt plays the role of Leah, a hopelessly naive schoolgirl who genuinely thinks that she needs to do stuff in order to impress the boys at school. Apparently one of her friends has already done similar things so it must be ok. Leah is pathetically unconvincing as she attempts to justify to herself that she’s ready for it all when she so clearly isn’t. As the show goes on there is an overwhelming sense of face-in-palm frustration, a sense of head-shaking disbelief that anyone so vulnerable could be so naive.

Harcourt plays the role brilliantly, portraying an individual who is too timid for the real world, a young woman with an immature understanding of what’s going on around her. There’s an overwhelming urge to just shout out: “Don’t do it, don’t be stupid!” But this attitude towards young girls transitioning to womanhood is surely a symptom of the wider taboo – that perhaps their sexual progression somehow needs be protected and controlled carefully. Is it the same for young men?

In contrast to Leah’s relative inexperience is Georgie – a much older, brasher and altogether more feisty woman who seems to know exactly how her own sexuality relates to the complexity of what all the men around her are looking for.

Alexandra Maxwell plays the role with an elegant sophistication. Georgie has some vulnerabilities, she mentions the loss of her father and the sad end of a recent relationship, but other than that she is an Alpha Female who is not ever likely to be a “victim” at the hands of any man. Maxwell’s portrayal of Georgie is calm and controlled, compared to some of the explicit detail that she’s giving the impression created is that “she doesn’t look the type”. But again this is probably the wider taboo talking, who can say what is and isn’t normal when it comes to sexual desire?

Leah and Georgie alternate on the stage, each telling their own story. The script is cleverly written, tension builds on both fronts. Yes, it is definitely sexually explicit, but this isn’t seedy, it’s not the female equivalent of some lads in a pub beating their chests and boasting about what they’ve been up to. But then at the same time it’s not overly “feminised”, the stories of Leah and Georgie are presented almost as matter-of-fact descriptions of some events that occurred.

In the end what’s left for the audience is a rude awakening. It’s certainly unusual and possibly even shocking to see women talking explicitly about themselves having sex, that’s the kind of vulgar behaviour normally only exhibited by men. But then it’s a fundamental part of existence, if you’re shocked by it and find it all uncomfortable then maybe you’re the one who’s the freak?