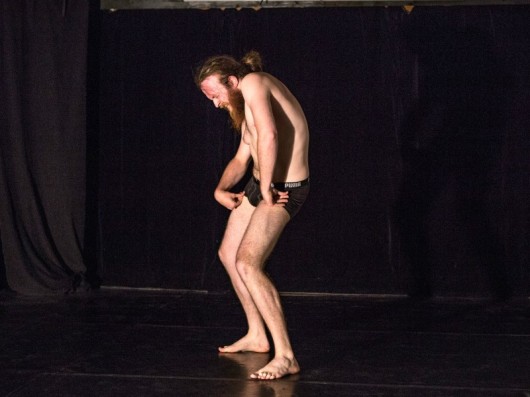 Created and performed by Belgian actor Simon de Winne, Baardeman is a puzzling dance spectacle centred around one man and his extreme dance moves.

This is theatrical performance stripped bare – almost literally. The audience is greeted by a man sat beside the stage in his underwear. He seems fairly relaxed. Eventually he steps forward and begins the show. With no accompanying music or sound effects, he begins to unleash the kind of dance moves that would probably result in an arrest and some form of co-ordinated social care intervention by numerous government authorities, rather than just a removal from the premises by an impatient bouncer.

As with any man who demands attention on the dance floor, it’s all ok for a few minutes but the situation quickly becomes unsustainable. And sadly that’s what happens in this performance. Because Simon de Winne is clearly not a professional dancer, the entertainment factor disappears within just a minute or two, exactly as it would in any nightclub. What it means for this performance is that there’s a genuine lack of anything really going on.

Occasionally our dance legend takes his seat and presses a few buttons on his laptop, playing a piece of music that he likes. But then he just sits there, and we all listen with him. Even during his silent exertions, there are periods of nothingness, 30 seconds or more of him just staring at his own hands, or hesitant pauses before the next body twist emerges.

There’s nothing vastly wrong with this offering, but then there’s nothing particularly outstanding. It’s just some guy in his pants dancing around a bit.