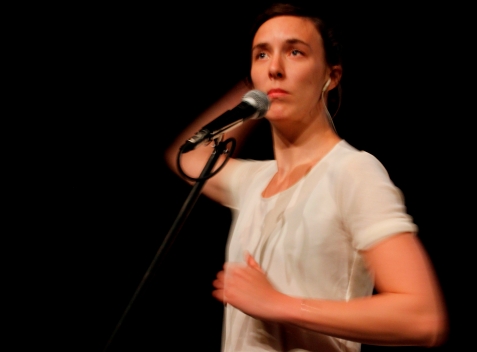 Can the graphical representation of a sexual act in the form of a line drawing ever be used as a musical score for generating a solo vocal performance??

If you’ve never considered this question before then you need to get out more. Thankfully though, Dutch theatre company BOG resolve the matter in their play One, delivered as part of Flare – the international festival of new theatre being held in Manchester in early July. The answer is an emphatic yes.

Centre stage is Lisa Verbelen, a strangely apprehensive and nervous looking individual who soon reveals that she’s treading a very fine line between genius and insanity. The set is like something out of a Reeves and Mortimer sketch: a circular stage which looks a giant clock with one hand very slowly revolving around it. On the end of the hand is a bright light and some spinning bits and bobs with wires and switches, it looks like the most fun GCSE science project ever. Exactly what purpose it serves and what it all means is a mystery – as the dastardly contraption rotates around the stage once every minute or so, poor Lisa has to remember to step over it, which is annoying for her as she’s trying to concentrate on the job at hand – making lots of weird noises.

It’s definitely not singing in any particularly melodious or harmonic way, it’s more like baby talk. It takes a few minutes to work out what’s happening: behind Lisa is a video screen showing the unfurling of a long, continuous roll of cartoon-like sketches and doodles – lots of strange little squiggly lines and dots. Sometimes the lines go up, sometimes they go down, sometimes it looks like a pattern is being drawn but then sometimes it just seems random. But, as this ‘musical score’ rolls out, Lisa vocalises along with it, matching the timing and the changes in pitch. Suddenly there is a welcome sense of understanding, a huge moment of intellectual pride in having recognised the link between the video footage and Lisa’s vocal exertions. In amongst the illogical and irrational, there is some order and sense. Or is there?

Having delivered her strange vocalisation, Lisa finishes by plugging in an electric guitar and belting out a rock ballad. “Who knows where time goes?” she sings. It’s hard to say where the time went in this particular performance: depending on your tastes, this could either be like watching a really bad X Factor audition or it could be considered as theatrical excellence of the highest quality. If you like having your mind messed with in ways that you never thought possible, One by BOG is definitely for you.

One thought on “One”