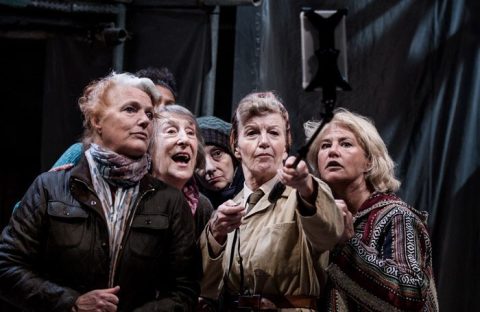 No one can say that they’ve truly seen Greater Manchester until they’ve seen it from the top of Winter Hill. For the vast majority of Great Mancunians, the mighty Winter Hill is the only thing visible on the western horizon, sitting there as it does, with its distinctive TV mast all lit up with sexy red lights.

On a few days every year the sun goes down right behind the base of the mast – a special cosmic alignment that provides a profoundly spiritual uplift. This icon of the Greater Manchester skyline is the both the title and the setting for Timberlake Wertenbaker’s newest play, Winter Hill, but, sadly, there is nothing spiritually uplifting about any part of this production in any way.

Winter Hill is a ludicrous tale: a group of very nice ladies convene their regular book club up on the hill, only to then blow themselves up in an effort to prevent foreign investors from building a luxury hotel. If this plot seems a little far-fetched and implausible, the rest of the production isn’t much better.

The set is genuinely ugly, made up of some random scaffolding poles draped with dirty plastic sheets. These presumably came from a local building site where, right now, fat, sweaty builders in hard hats are stood in a circle around a bemused project manager, sipping mugs of tea and scratching their arses wondering where all their gear’s gone. Completing the mess on set is some gravel that has been left in piles all over the floor, it is not clear whether this is genuinely sacred gravel from the summit of Winter Hill or whether it’s just a bucketful of dirt scooped up from behind the fire exit. The story behind this gravel may well prove to be interesting, and could be linked to the scaffolding situation in some way?

The sound effects included around twenty seconds of wind noise. But anyone who’s been up to Winter Hill will tell you that, up there, it can sometimes feel like it is strong enough to strip your frilly underwear clean off from beneath the rest of your clothing. It’s just not believable.

And that is the problem with every part of this play: the set, the sound effects, and especially the story – none of it is plausible.

This play doesn’t really have a meaningful connection to Winter Hill but then, regardless of setting, it’s an awful piece of storytelling anyway. The playwriting formula here seems to be as follows: flick through today’s editions of The Guardian and The Independent in order to identify some contemporary, mainly left-wing issues (feminism, democracy and protest, housing shortages, public spending cuts, terrorism, protectionism, foreign investment); then concoct any old story to link them all together, but make it relevant to the northern masses by setting it on top of one of their hills.

In order to keep making a few quid out of the production, do the following: open an electronic copy of the script in a word processor, search for all instances of “Winter Hill” and replace that text with any other local landmark of your choice, relevant to whichever city you happen to be performing in.

It will work perfectly well: some locals will turn up and get quite giddy because someone’s written a play about their magnificent hill / park / pond. But others will wish that they’d just kept on driving past the theatre and spent the evening on top of the hill itself, reading both The Guardian and The Independent in the rain – it would have been a far more exhilarating and refreshing experience.